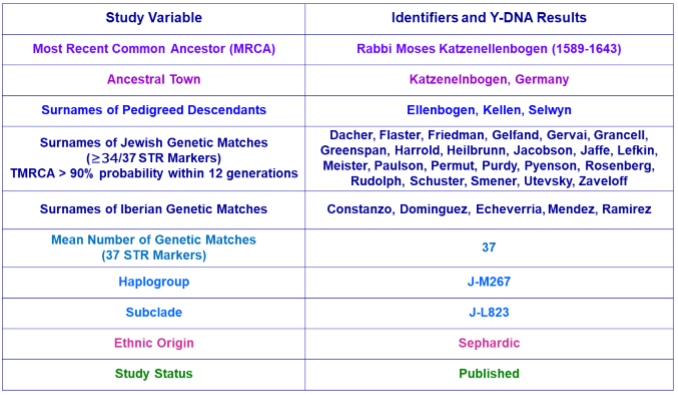 For centuries, Jews have sought their yichus by connecting themselves to rabbinical families, either through marriage or by a paper trail. Thanks to recent advances in genetic genealogy and DNA technology, this is now possible to do for many more individuals of Jewish descent than ever before.

For a little over ten years now, my research team and I have been conducting Y-DNA research studies which utilize both traditional genealogical and current DNA methods and technology to identify the unique Y-DNA genetic signature and ethnic origin of some of the world’s most esteemed and historically significant rabbinical lineages and dynasties. These include the Katzenellenbogen, Lurie, Polonsky,  Rappaport-Cohen, and Shapiro rabbinical lineages, and the Twersky and Wertheim-Giterman Chassidic dynasties.

We have also conducted Y-DNA research studies on lineages descending from such luminaries and tzaddiks as the Baal Shem Tov, Rabbi Levi Yitzchak of Berdichev, Rabbi Naftula Cohen of Belaya Tzerkov, Rabbi Raphael of Bershad, Rabbi Yechiel Michel of Zlatchov, Rabbi Yehuda Heller-Kahana of Sighet, and the Shpoler Zeida.

Anyone who matches one of these Y-DNA genetic signatures shares a common paternal ancestor with these pedigreed rabbinical descendants. Identifying that common ancestor would enable one to link to a pedigree and paper trail that may be many centuries old, and to rediscover their family’s lost Jewish heritage.

Many of our rabbinical heritage Y-DNA research studies have been published in the Jewish genealogy literature, and have also been posted online at Academia.edu: https://independent.academia.edu/ JeffreyMarkPaull.

In this research update, I explain the importance of rabbinical heritage research studies to the practice of Jewish genealogy and present an overview of some new and interesting findings and observations drawn from our Y-DNA research studies of thirteen rabbinical lineages and dynasties, including the defining haplogroup11 and subclade12 that is associated with the Y-DNA genetic signature for each of these lineages.

Background – Why We Research Rabbinical Lineages

The major challenges and difficulties that are associated with tracing Jewish ancestry are well-known to Jewish genealogists. They include:

 The lack of Jewish surnames prior to the early 19th century and surname changes subsequent to immigration during the late 19th and early 20th centuries.

 The destruction of civil and Jewish community records, along with the repositories of Jewish learning and culture, including synagogues, yeshivas, and cemeteries.

 The lack of accessibility and difficulty in retrieving and translating existing archival records.

As a result of these difficulties, most Ashkenazi Jews cannot trace their ancestry back more than a few generations. Among those fortunate enough to be able to go back further, they run into a brick wall in the pre-Jewish surname era, before the mandated adoption of fixed, inherited surnames, during the late 18th to early 19th centuries in Eastern Europe and the Russian Empire.

The notable exceptions are the major rabbinical families, who adopted fixed surnames long before they were mandated by governmental authority. The lineages of these families have been preserved for centuries. Those who can connect to a major rabbinical family can thereby trace their ancestry back many more generations. Continue Reading…